by Chris Carley
in Trip Reports
12

Delta Air Lines showcased another one of its major airport upgrade projects on Wednesday: LaGuardia Airport’s new Terminal C. And Eye of the Flyer was there for all the festivities!

Delta is investing billions upgrading several of its facilities at United States airports. They helped build a new terminal in Salt Lake City that opened in 2020. The airline had a big part in a recently-opened arrivals hall in Salt Lake City. Its massive Sky Way project in Los Angeles is opening one part at a time.

And on Wednesday, Delta unveiled its newest investment: the beautiful Terminal C at LaGuardia Airport (LGA) in Queens, NY.

Governor of New York State Kathy Hochul addressed the crowd and publicly praised Delta for its investment in New York. Governor Hochul was pleased that Delta kicked in a significant amount of its own money and didn’t rely solely on public funding to get the job done. She also noted that she was practically a daily Delta commuter as Lt. Governor, flying between New York City and Buffalo. Governor Hochul joked she got to know some of the LaGuardia staff during her flight delays at LGA — which she blamed on bad weather, not Delta operations.

Delta CEO Ed Bastian — a New York native — said the airline started with six gates at LGA. Delta will lay claim to 37 gates when the entire project is finished.

Governor Hochul, Mr. Bastian, and other guests took part in a ribbon-cutting — which clearly was the must-have shot of the day for many people. 🙂

Guests were given these commemorative medals after the ceremony. When Does Delta’s Terminal C at LaGuardia Open?

The building opens officially for business this Saturday, June 4. (Terminal D closes Friday night, though its Sky Club will remain open for a few months.)

The addition of several new gates means hardstands will be a thing of the past. (You’re crushed, I know.) So, say goodbye to these: I found this interesting: Delta Connection flights account for about 70% of Delta’s flights at LGA. The other ~30% is Delta mainline. (I bet the Delta pilots union isn’t a fan of that.)

Delta did a very impressive job with the new Terminal C.

Delta added a new walkway from a parking structure. But the airline also seems to have plans ready if the AirTrain (or a project like it) becomes part of LGA. There’s a ton of check-in space on the departure level.

The ribbon board lining the wall displays the same type of information as LAX’s: flight information, Sky Club capacity, etc. 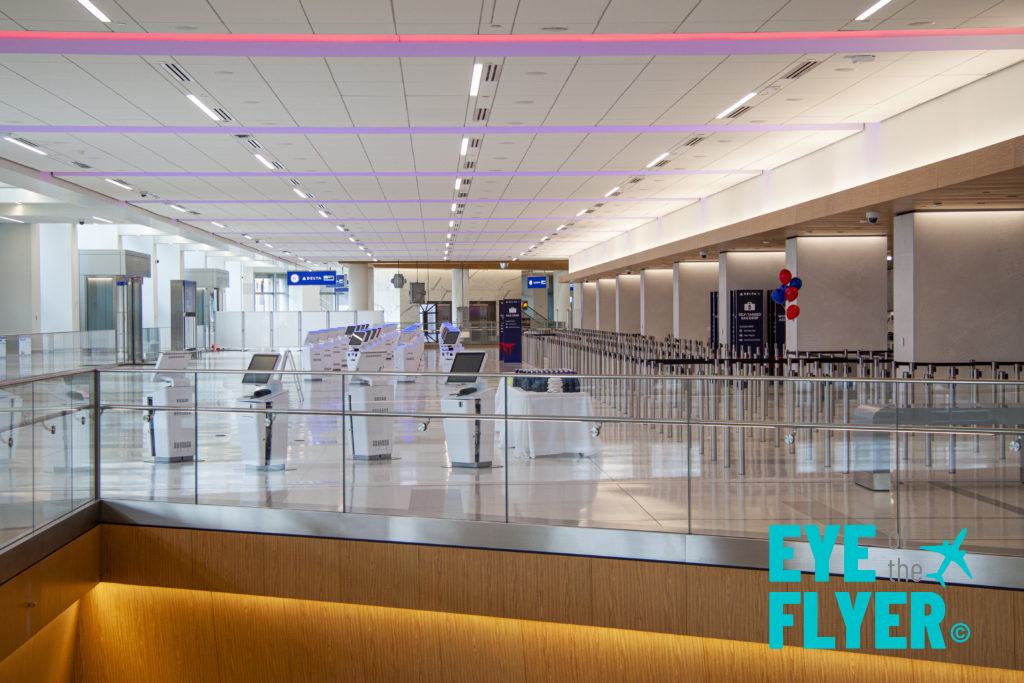 He also explained the window glass automatically dims and brightens so as to regulate how much sunshine comes into the area.

Passengers can help themselves to a touchless, self-tagging option for checking bags. Or they can use Delta agents for a traditional check-in option. 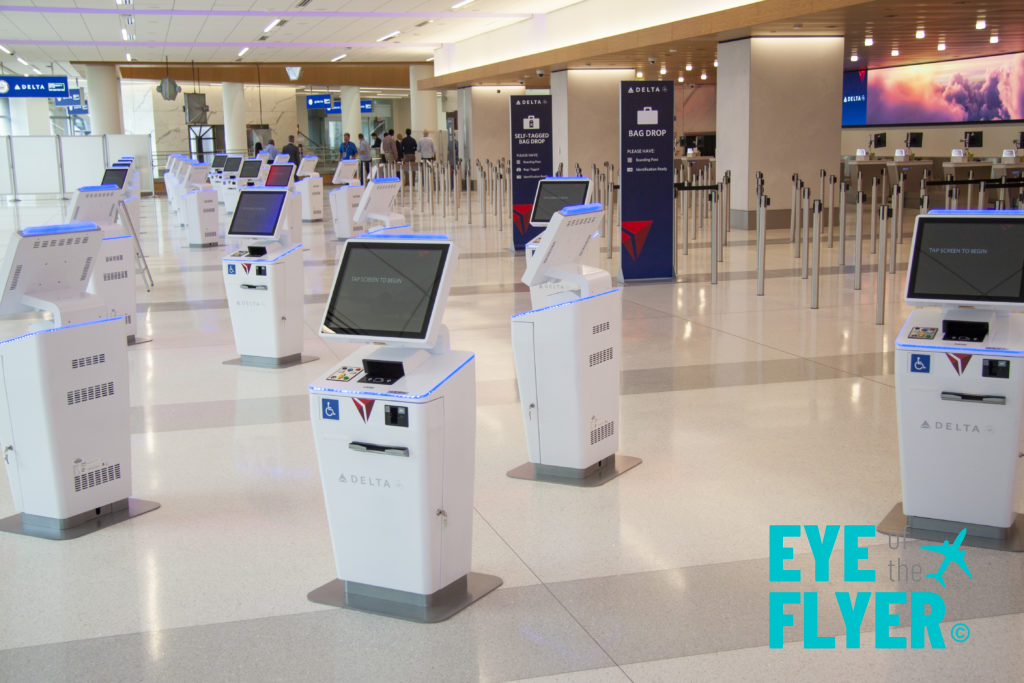 Here’s an interesting fact: only about half of Delta’s LGA passengers even bother checking bags and instead use hand luggage only.

The new Terminal C departures hall is massive and also features plenty of natural light. (Natural light is a big thing with Delta’s new projects — and I love it.)

But check out this cool feature. The lights on the wall change every time a Delta flight departs LGA — and the change reflects that flight’s destination! Let’s say a flight departs for Orlando (MCO). The presentation reflects something pertaining to Orlando. Then a flight for Washington National (DCA) takes off. The theme changes to something apropos of the nation’s capital.

These posts indicate the wait times for various security lines. The TSA screening areas feature the new Analoigic scanning machines that René blogged about a few months ago. Laptops, liquids, and tablets won’t have to come out of bags for anyone. But before those of us with TSA PreCheck get into tizzy, keep this in mind: it took forever for some of the baggage scannings. It appeared one media rep’s wallet and belt went through five different scans.

Those of you flying through Terminal C during the first few months: please comment on your security experiences.

Here’s a look at the new gates and concourses.

There’s some good planespotting, too! The gatehouses feature the same seating as LAX and offer identical power ports for each seat. These windows also dim and brighten as sunlight necessitates. This adjusts how much heating and air conditioning must be used — and Delta’s carbon footprint. (And costs — but, hey, good for them.)

Each restroom showcases a mosaic pertaining to some part of New York. A number of new restaurants and vendors are also part of the new addition.

There’s space for widebody planes at Delta’s new gates. But don’t get your heart set on seeing any.

That said, I’ll just leave this right there:

Friendly reminder: The old @LGAairport terminals ended up in such a state of disrepair and the laughingstock of the entire world because @PANYNJ let them get to that point.
Let’s hope that doesn’t happen again.

The new Delta Sky Club at LAX lays claim as the airline’s biggest lounge. But not for long.

RELATED: What is the Best Amex Card for Delta Sky Club Lounge Access?

Weighing in over 34,000 square feet, the behemoth at LGA will officially take over that title when it’s completely finished in the next couple of years.

But the darn place is already huge — and impressive. A Delta spokesperson told me the club was designed with sort of a metropolitan, hotel, big city feel to it. A more detailed review of the Sky Club will appear in the next couple of days. But here are a few pictures and notes to hold you over until then! There’s also a door directing passengers to Lyft pickups. (This also seems to be where you find cabs and Uber, too. But remember that Delta and Lyft have a partnership.) Wow. I’m impressed with the Delta’s new LaGuardia digs. Even moreso than what they did at LAX. Credit where its due: when Delta puts its money and creativity into something, it comes through.

The next phases of its LaGuardia project open during the next few years.

Disclosure: Delta provided me a discount for Lyft transportation between Manhattan and LaGuardia. I covered the remaining balance and all other costs of the trip.